A Battery You Can See Through 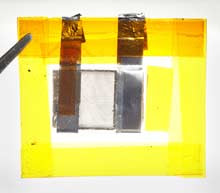 Transparent batteries could lead to designs for "transparent" cell phones and other gadgets.

Researchers at Stanford University have made fully transparent batteries, the last missing component needed to make transparent displays and other electronic devices.

Some battery components are easier to make using transparent materials than others. The electrodes are the tricky part, says Cui. One way to make a transparent electrode is to make it very thin, on the order of about 100 nanometers thick. But a thin electrode typically can't store enough energy to be useful.
Another approach is to make the electrode in the form of a pattern that has features smaller than the naked eye can see. As long as there is enough total electrode material in the battery, this type of electrode can still store a significant amount of energy. Cui designed a mesh electrode where all the lines of the mesh are on the order of 50 micrometers, effectively invisible, and the squares inside the mesh contain no battery materials.
Fabrication is also tricky, since the usual methods for making components at this resolution require harsh chemical processes that damage battery materials. The Stanford group instead used a relatively simple method to make the transparent mesh electrodes, which are held together inside a clear, squishy polymer called PDMS.

To make the complete battery, they sandwich a clear gel electrolyte between the two electrodes, and put it all inside a protective plastic wrapping. The Stanford researchers created prototypes, and used them to power an LED whose light can be seen through the battery itself.
Cui says these batteries should, in theory, be able to store about half as much energy as an equivalent-sized opaque battery, because there is a trade-off between energy density and transparency. They can lay down a thicker mesh of electrode materials to store more energy, but that means less light will get through.
So far, his lab's prototypes can store 20 watt-hours per liter, about as much energy as a nickel-cadmium battery, but Cui expects to improve this by an order of magnitude, in part by reducing the thickness of the polymer substrate, and by making the trenches that hold the electrode materials deeper.

So the day is not far when we will see our fingers busy in some sort of transparent gadgets...:)