Tuesday, September 06, 2011
Has your Facebook status ever been too complicated to describe in less than 500 characters? The current maximum length of a status update on Facebook is 500 characters. If you exceed that number you will get this annoying error message:

Status updates must be less than 500 characters. You have entered 3,850 characters here. Notes can be much longer. Would you like to edit and post your update as a Note instead?


Well, I know that you can use Facebook Notes for this purpose, but wouldn't it be really awesome and catchy to update such long messages directly as your Status instead of using Notes for it?

Sometimes you may have a lot to say but you don’t want to post it in a note. Well I'm here to save your day! With this cool little loophole in Facebook you can post as many characters as you want. This also means you can use some of our cool Status Art to spice up your status.

This is how it works:
All you have to do is to upload a tiny picture which is/isn't prominently visible. This is done by using the Photo Sharing option and selecting the “Upload a Photo”.

Now simply grab any picture off your hard drive, a tiny one in case you don't want the picture to get displayed prominently or a good sized picture which you think will go well with your long status update.

Once you are done with selecting an appropriate picture, you can write as much as you want! Part of your message will be covered up by a “See More” link, but its better than nothing. 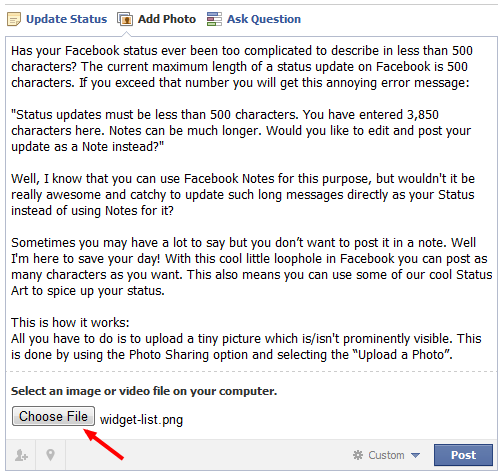 Finally your Long Status Update would look something like this: